I was recently asked via Twitter (Hi Jennifer Oldfield;-) to share some of my favourite wordless picture books.  I love that Jennifer is using them for a high school book club, because all kids (big and little) need picture books.  So here’s the two I immediately thought to share with Jennifer, and a few more that have become favourites in the classrooms I have visited.

As a side note, my first recommendation “Unspoken” was the first picture book I read aloud, and I was NERVOUS! But let me tell you . .  . The Middle Years class that I read it to loved it!  It took us nearly 45 minutes to read the book it it’s entirety.  Sometimes teacher shy away from wordless picture books as it’s hard to “pace them” the same way you would a worded book.  To help with this, I often introduce a thinking routine.  Using “I Notice/I Wonder” or “See, Think, Wonder, Feel”  helps students to think aloud and share with an elbow partner and the group as a whole.  Also, as the images are so important to decoding the story, it helps to use a document camera or download a digital copy of the book in order to project the pages in a larger format that all can see.

I do have provocation sets for quite a few of these books, so if there’s one in particular you’d like me to post, just let me know! 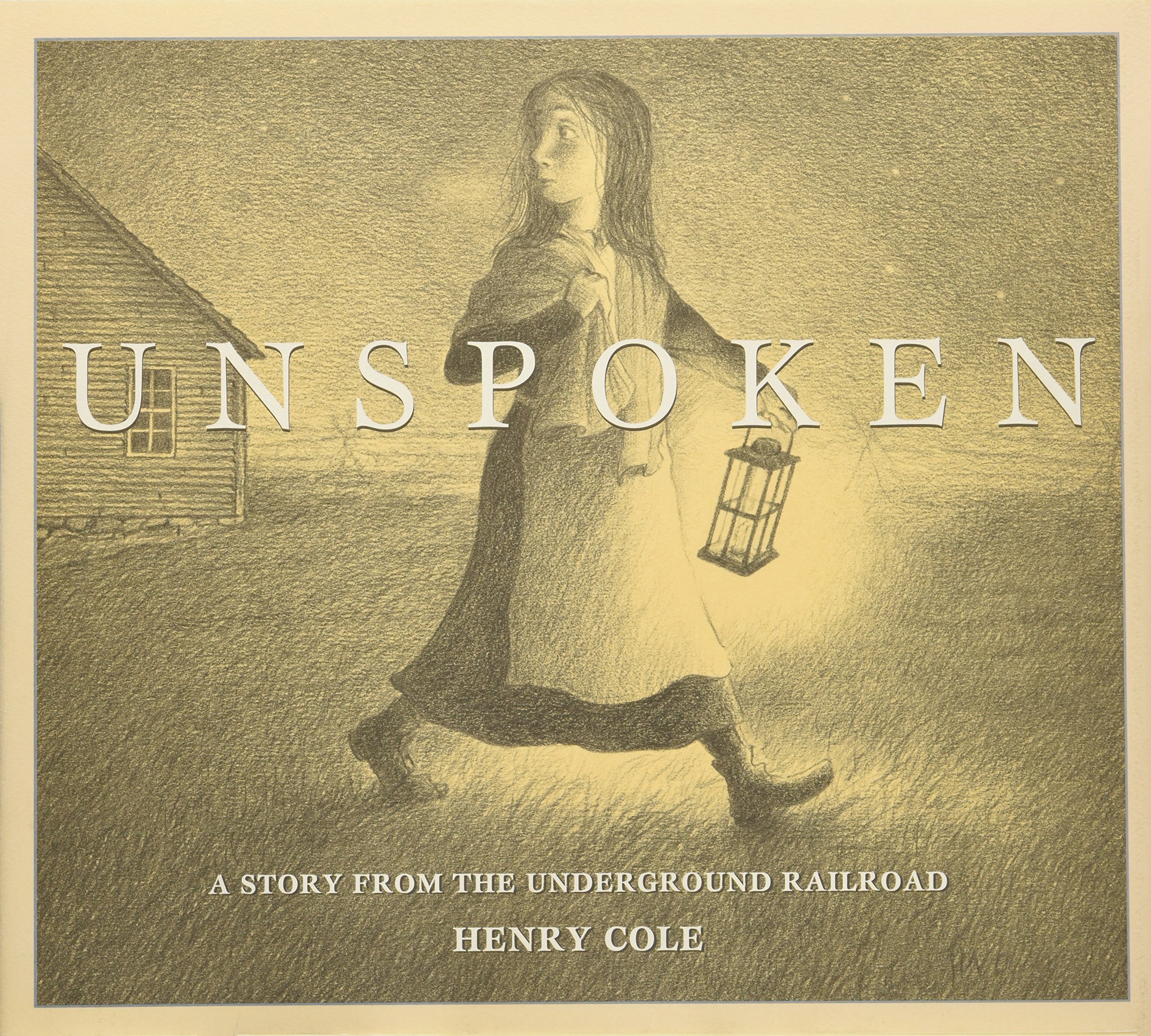 A young girl’s courage is tested in this haunting, wordless story.

When a farm girl discovers a runaway slave hiding in the barn, she is at once startled and frightened. But the stranger’s fearful eyes weigh upon her conscience, and she must make a difficult choice. Will she have the courage to help him? Unspoken gifts of humanity unite the girl and the runaway as they each face a journey: one following the North Star, the other following her heart. 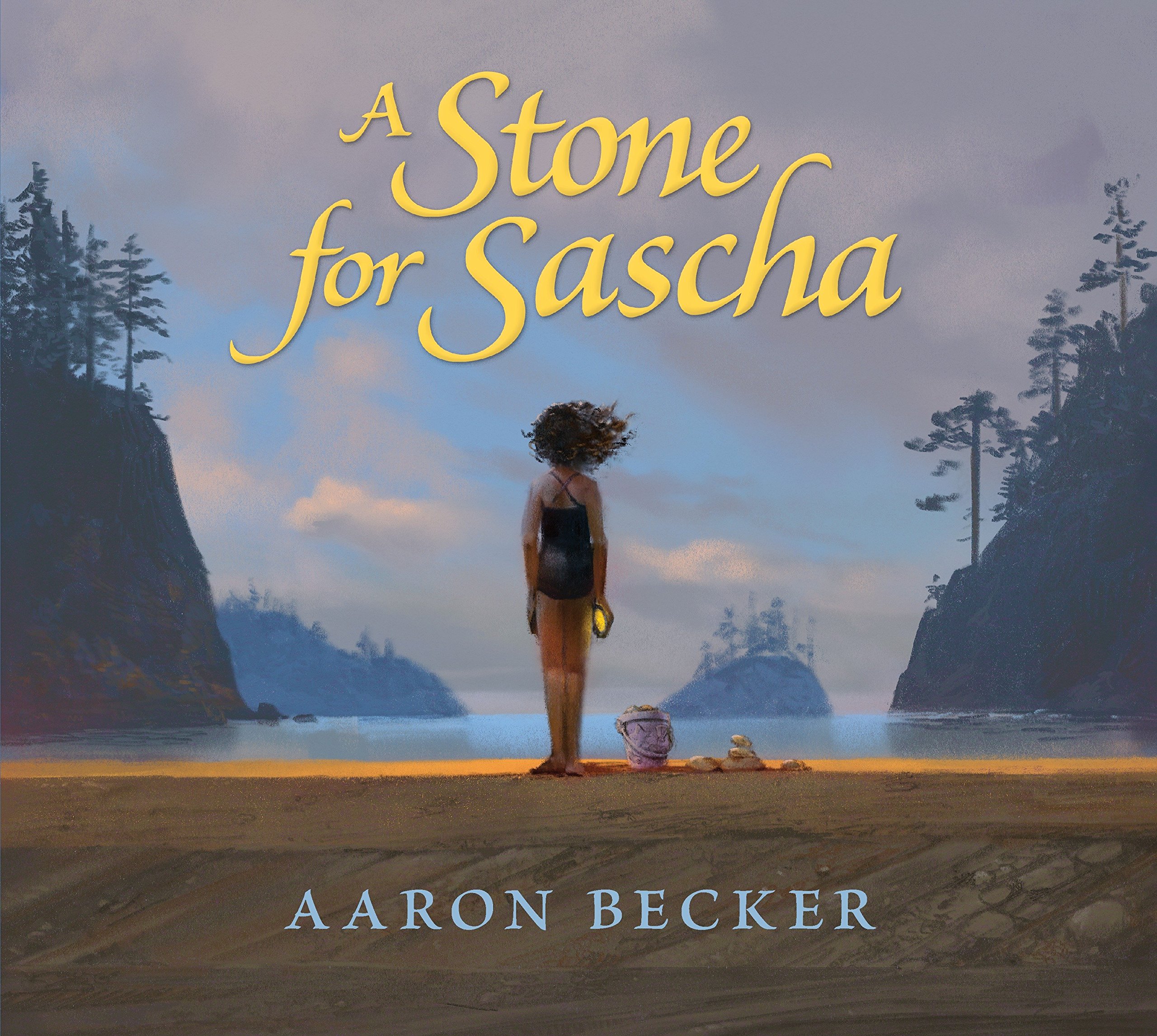 This year’s summer vacation will be very different for a young girl and her family without Sascha, the beloved family dog, along for the ride. But a wistful walk along the beach to gather cool, polished stones becomes a brilliant turning point in the girl’s grief. There, at the edge of a vast ocean beneath an infinite sky, she uncovers, alongside the reader, a profound and joyous truth. 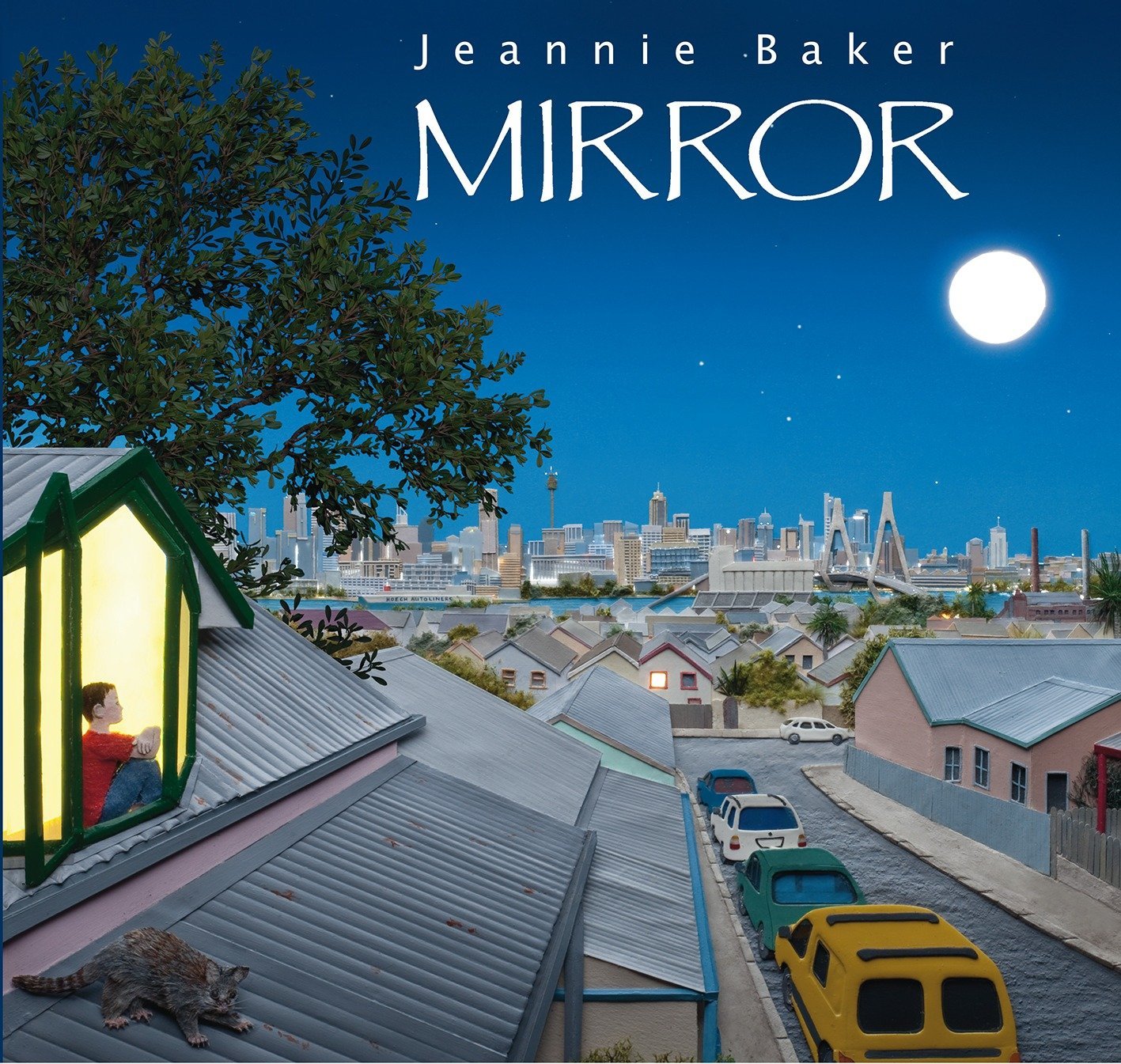 Somewhere in Sydney, Australia, a boy and his family wake up, eat breakfast, and head out for a busy day of shopping. Meanwhile, in a small village in Morocco, a boy and his family go through their own morning routines and set out to a bustling market. In this ingenious, wordless picture book, readers are invited to compare, page by page, the activities and surroundings of children in two different cultures. Their lives may at first seem quite unalike, but a closer look reveals that there are many things, some unexpected, that connect them as well. Designed to be read side by side—one from the left and the other from the right—these intriguing stories are told entirely through richly detailed collage illustrations. 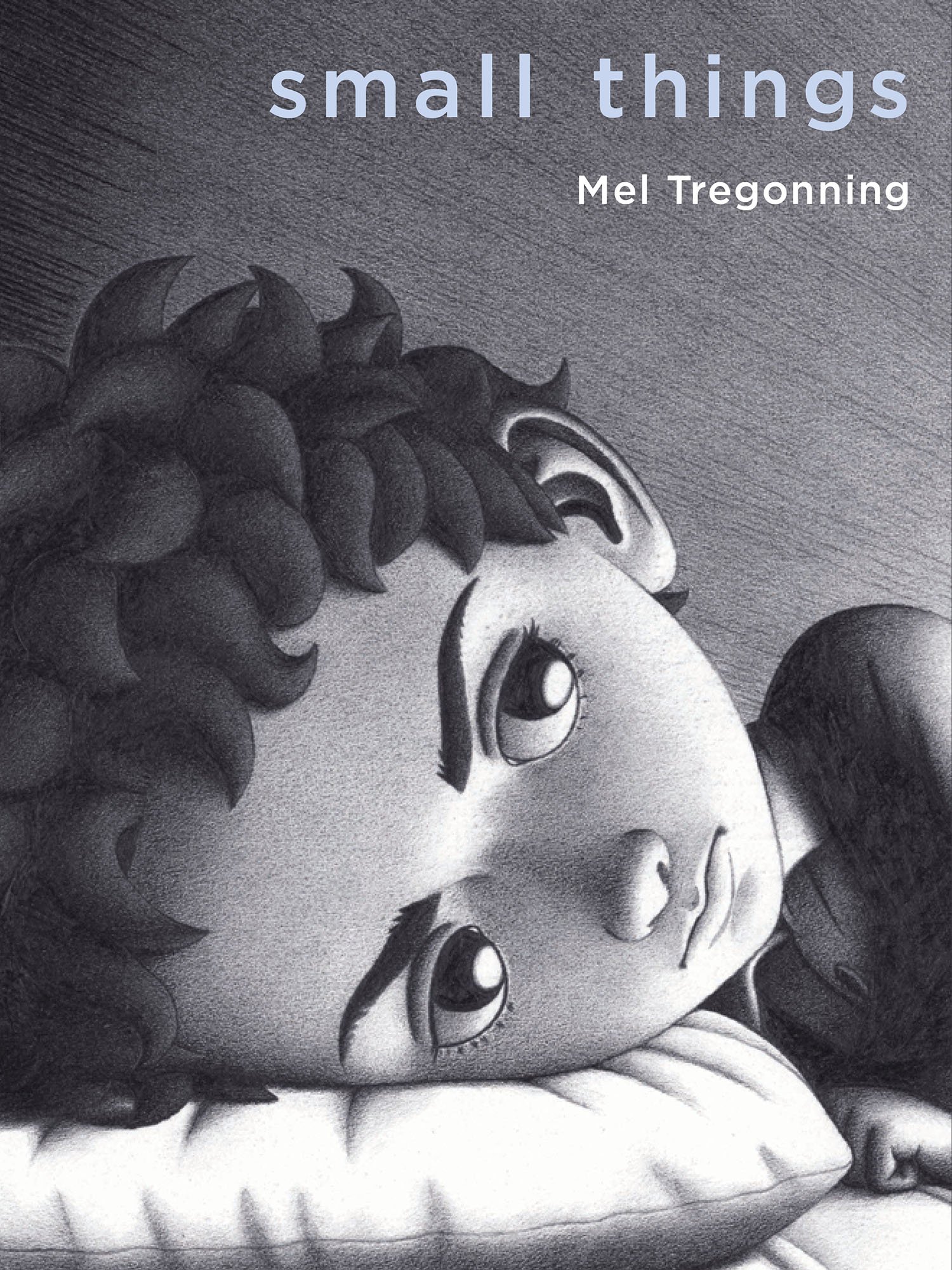 In this wordless graphic picture book, a young boy feels alone with his worries. He isn’t fitting in well at school. His grades are slipping. He’s even lashing out at those who love him.

The Journey, Quest, and Return Trilogy 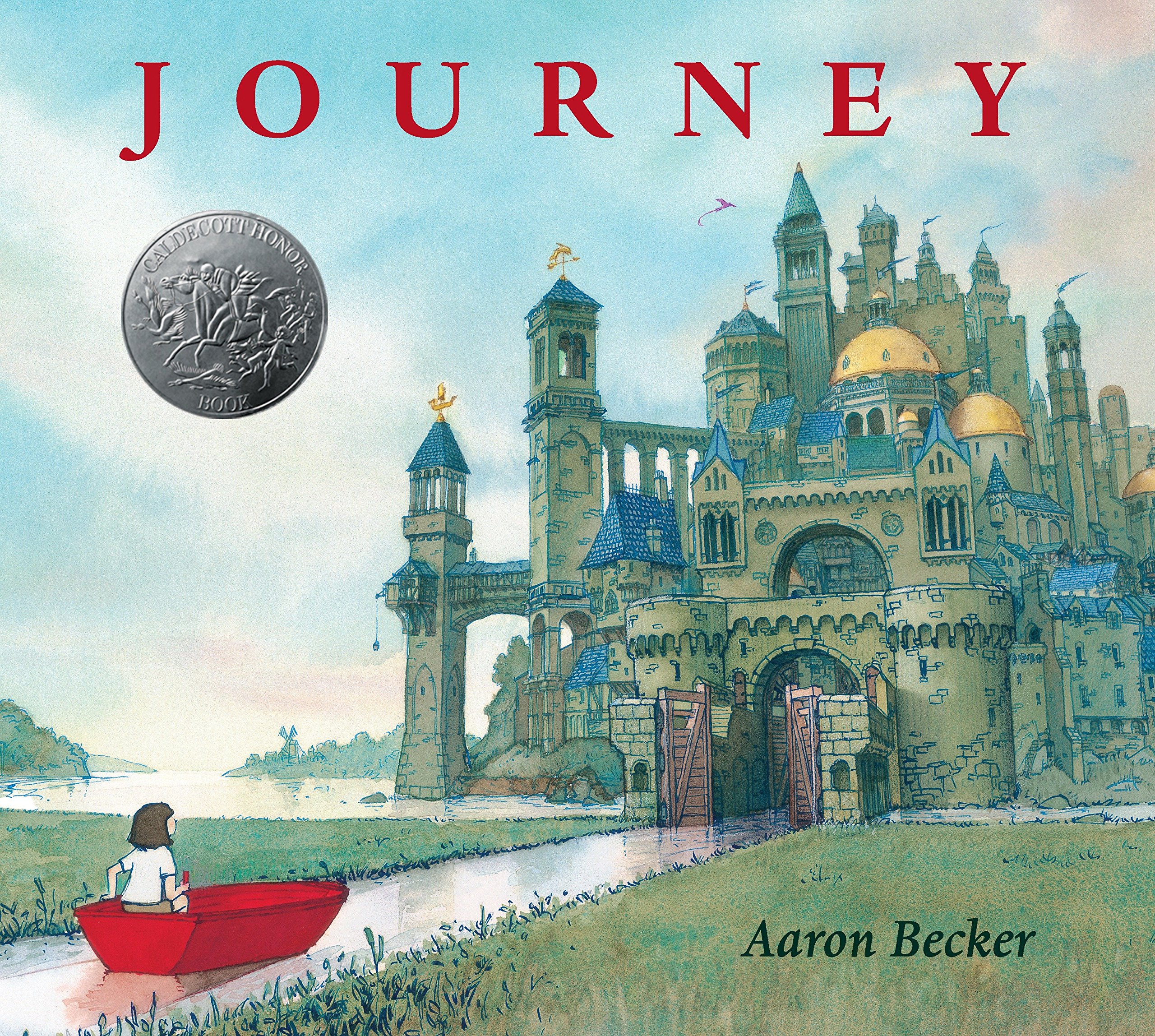 A lonely girl draws a magic door on her bedroom wall and through it escapes into a world where wonder, adventure, and danger abound. Red marker in hand, she creates a boat, a balloon, and a flying carpet that carry her on a spectacular journey toward an uncertain destiny. When she is captured by a sinister emperor, only an act of tremendous courage and kindness can set her free. Can it also lead her home and to her heart’s desire? 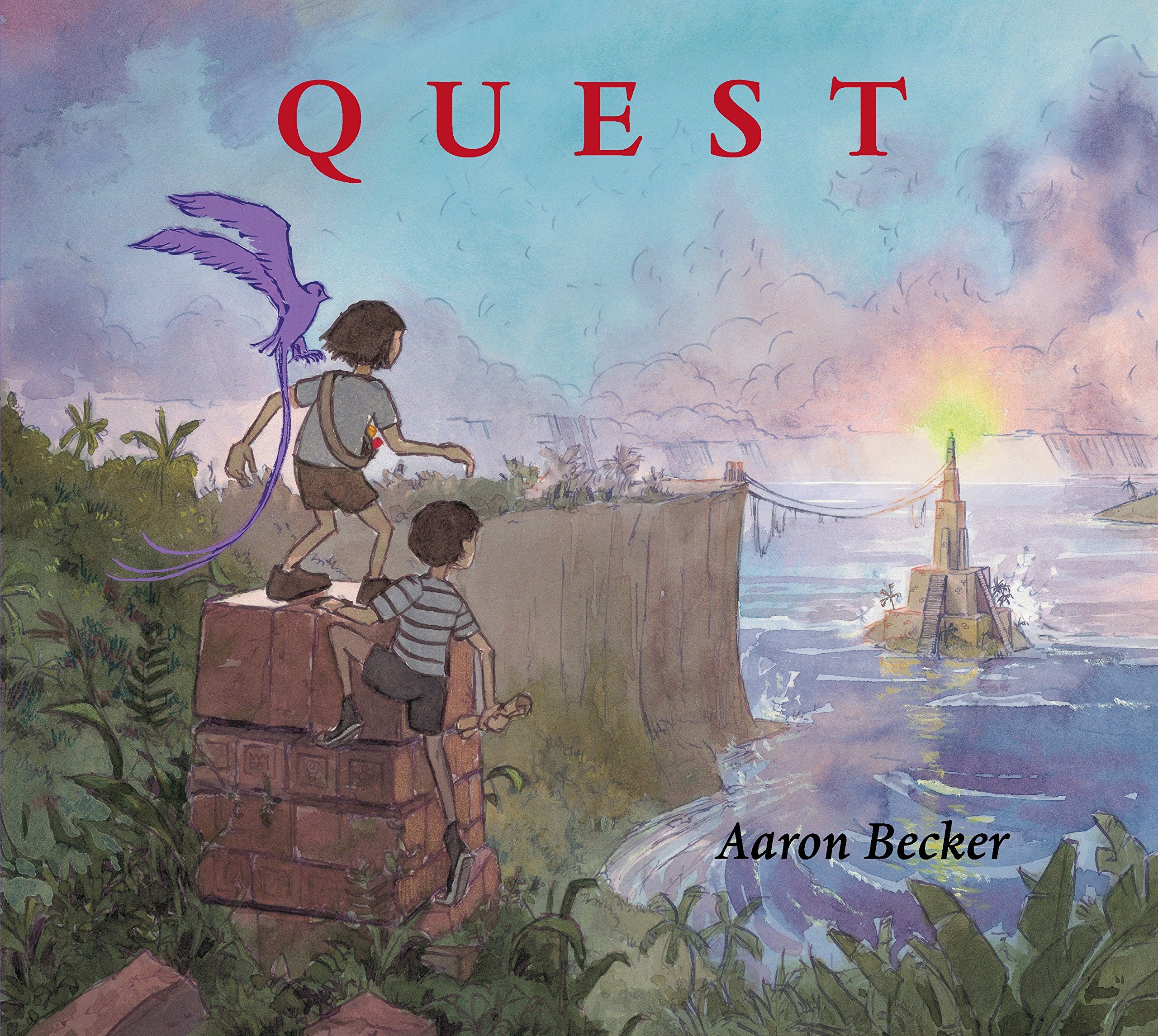 A king emerges from a hidden door in a city park, startling two children sheltering from the rain. No sooner does he push a map and some strange objects into their hands than he is captured by hostile forces that whisk him back through the enchanted door. Just like that, the children are caught up in a quest to rescue the king and his kingdom from darkness, while illuminating the farthest reaches of their imagination. Colored markers in hand, they make their own way through the portal, under the sea, through a tropical paradise, over a perilous bridge, and high in the air with the help of a winged friend. 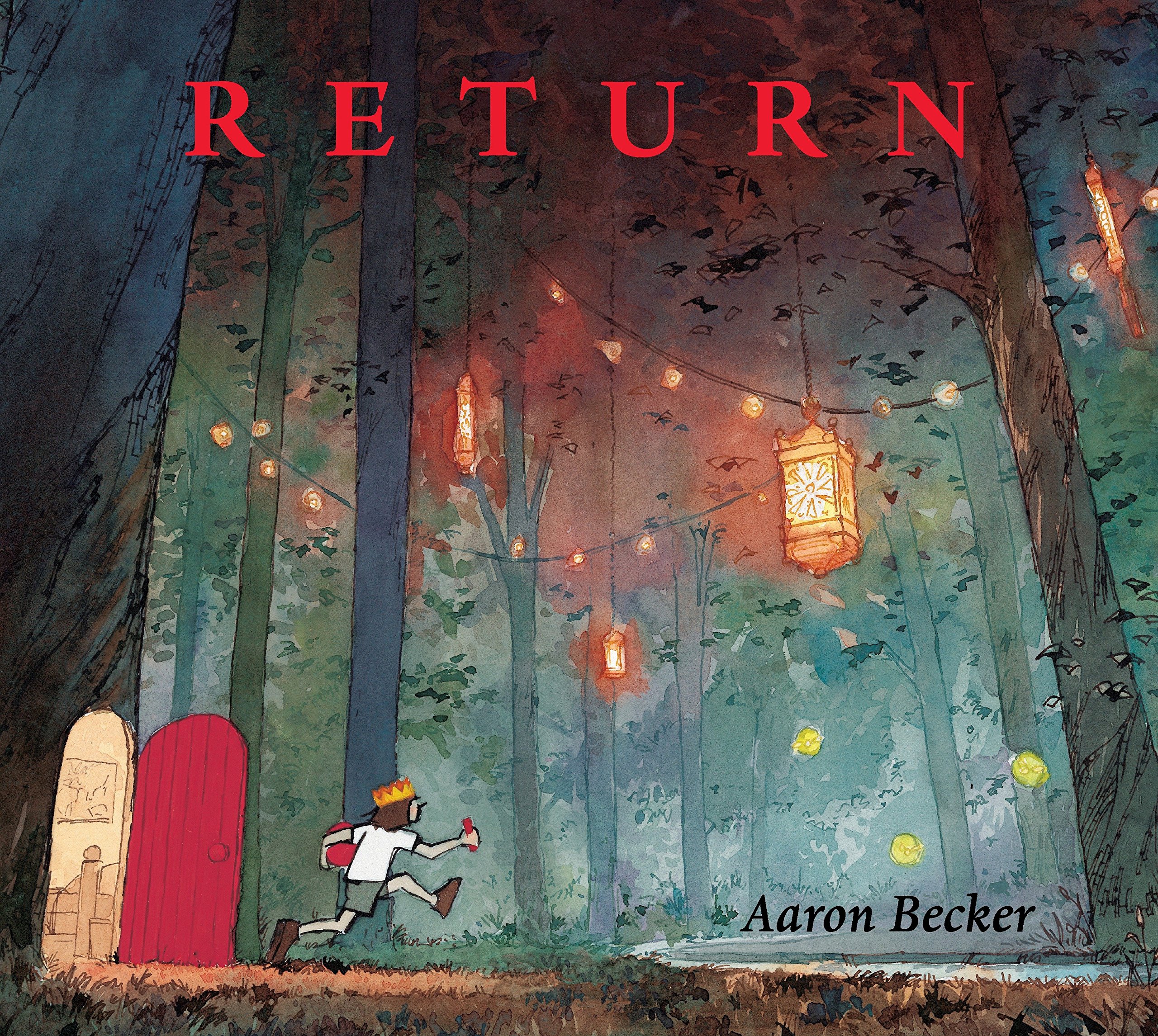 Failing to get the attention of her busy father, a lonely girl turns back to a fantastic world for friendship and adventure. It’s her third journey into the enticing realm of kings and emperors, castles and canals, exotic creatures and enchanting landscapes. This time, it will take something truly powerful to persuade her to return home, as a gripping backstory is revealed that will hold readers in its thrall.

Picture Books about Seeing the Extraordinary in the Ordinary 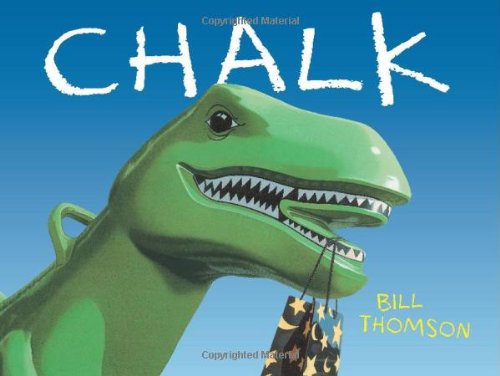 Three children discover a magical bag of chalk on a rainy day and quickly realize that whatever they draw with the chalk comes to life. 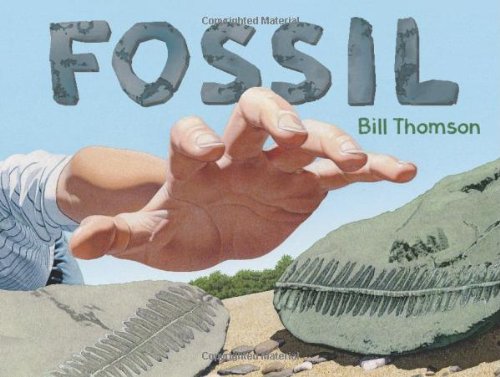 When a boy and his dog go for a hike, the boy trips on a fossil, and it comes to life, revealing an ancient plant. The boy is so intrigued that he breaks two more fossils that come to life—a dragonfly and a pteranodon. When these prehistoric creatures collide with present reality, the boy must figure out a way to make things go back to normal. 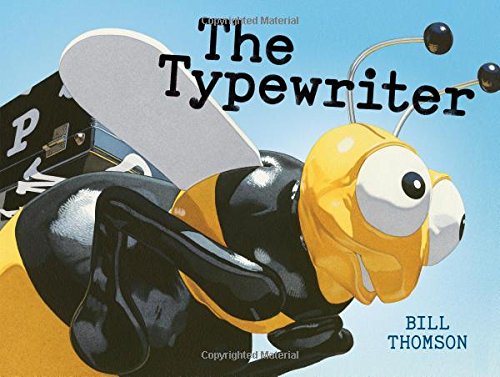 Using just nine words, the award-winning creator of Chalk takes readers on another unforgettable journey. When three children discover a typewriter on a carousel, they are transported on an adventure of their own creation—complete with a giant beach ball and a threatening crab. 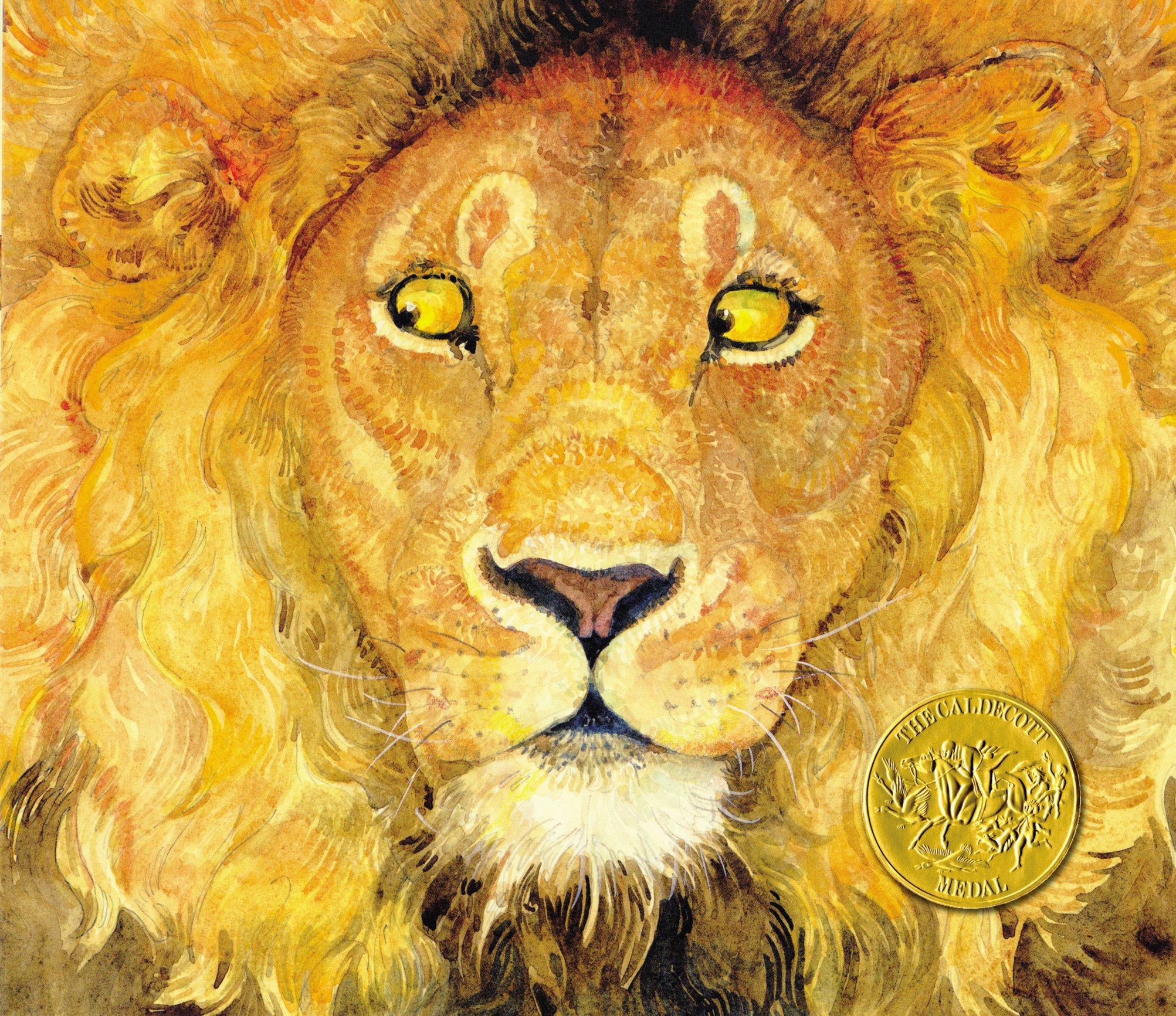 In award-winning artist Jerry Pinkney’s wordless adaptation of one of Aesop’s most beloved fables, an unlikely pair learn that no act of kindness is ever wasted. After a ferocious lion spares a cowering mouse that he’d planned to eat, the mouse later comes to his rescue, freeing him from a poacher’s trap. 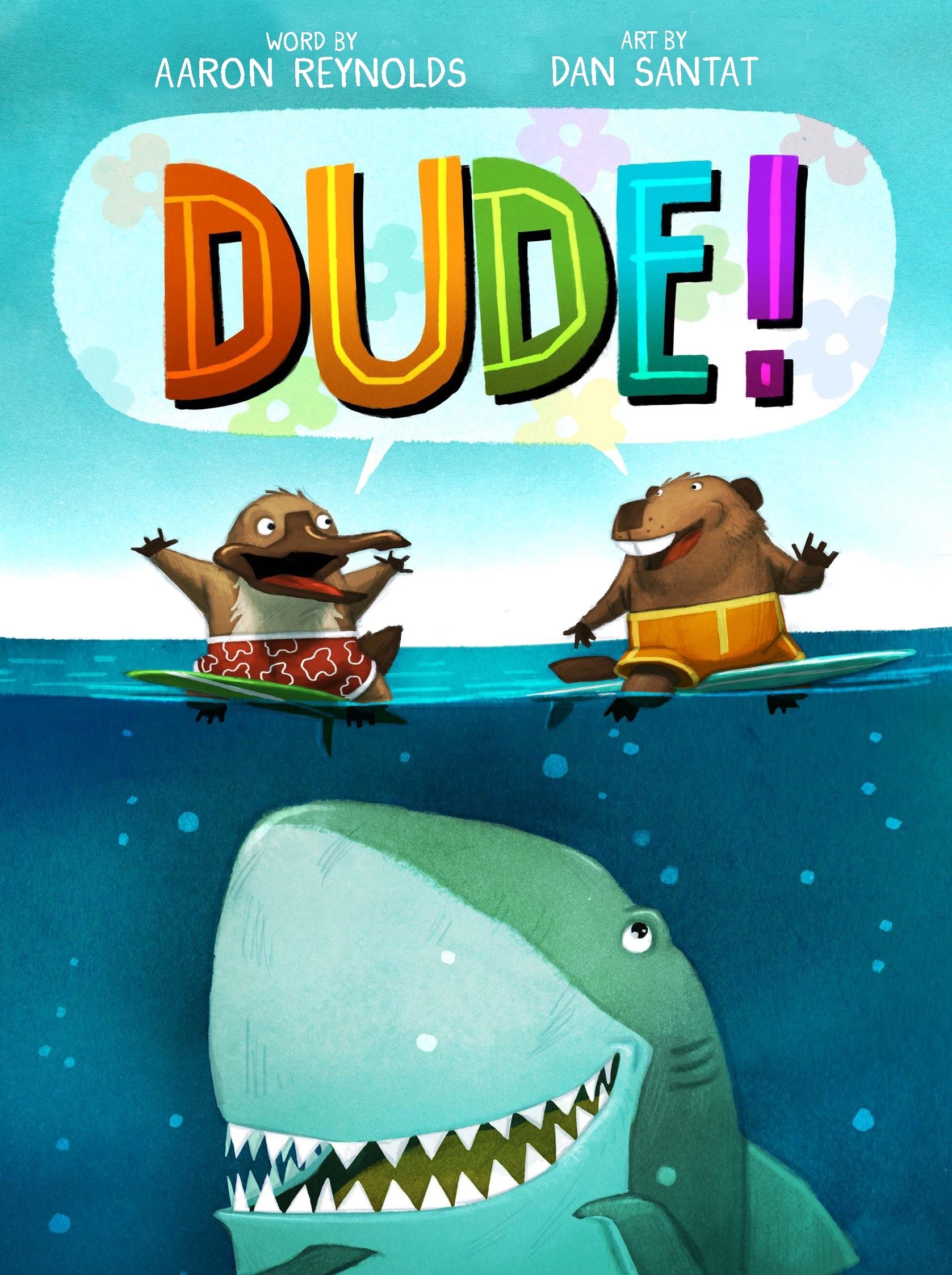 Dude! You have to read this book.

It’s totally about this platypus and this beaver who are friends. They want to go surfing but dude, there’s this shark who’s in the ocean, too.

But don’t worry. This shark approaches and you’ll never guess what happens.

** All book reviews from Amazon.com